Remember that friend from high school – the friend you told everything to and did everything with?

My friend was Cindy.  She was a petite brunette that had the most infectious laugh and everyone wanted to be around her.  We were friends back in the day of no cell phones so we’d call each other on a phone that had to stay plugged into the wall.  Instead of a touch screen there were either buttons or a dial with which to dial the numbers.  And if you couldn’t remember someone’s phone number you’d dial ‘0’ and the operator would put you through. We’d sit on the phone watching TV together.  Yep, I’d sit in my kitchen watching the 19-inch black and white TV while Cindy sat on the other end of the phone, watching the same TV show.

It was also just before cable TV and just as every house got a VCR.  Our friend Onna worked at the first video rental store and how I envied her for being in the center of all the excitement.

Hey…I’m from a small town, excitement was relative.  The first Jewel grocery store was a BIG deal.  And don’t get me started on the first McDonalds…..

We did have cars way back then and Cindy was the first to get her driver’s license.  I threw her a Sweet 16 birthday party and we had so much fun! We lost touch after high school, mostly because I was born without the keep-in-touch gene, like…it’s completely absent.  That was also the day they handed out the understanding-math gene because I don’t have that either. 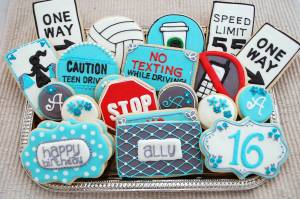 Life is short.  Don’t let years go by without connecting with someone you lost touch with, out of fear that it’s too late.  As long as you’re breathing it is never too late. Chances are good that they’re thinking about you too….

2 thoughts on “An old friend…”